skip to main | skip to sidebar

Recently we had to resize a VMware virtual machine disk. The original disk allocated for the virtual machine was only 8 GiB when it was noticed 32 GiB would have been desired. Luckily the virtual disk can be expanded with the VMware web interface or using the command line tools. Also, the Linux file systems, at least ext3, can be resized, so it is possible to resize virtual machines without having to reinstall.

A note of caution: What I describe belowed worked for me. I also took a backup from the virtual machine before doing any of the operations. There is no guarantee that this is the best, correct or even recommended way of doing the the resize.

About the terms I have used:
Expanding the virtual disk
The first task was to expand the original 8 GiB virtual disk to 32 GiB. Here is what I did on the host:

Now that the VMware disk image has been resized, what does it look like from the guest operating system? Boot up the guest and check with fdisk command:

As one can see, the disk is now larger, but the Linux partition is still the same size as before resize.

The next steps are to expand the partition and its file system. In this case since we are resizing the root partition, the operation can not be done from the host operating itself. One method is to boot a live CD that contains the necessary tools. 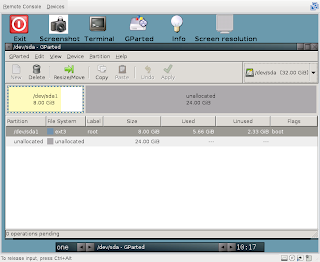 The main screen of GParted shows what the current configuration is. There is 8 GiB of allocated space for sda1 and 24 GiB space available for expansion. 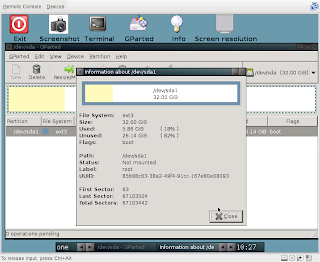 The resizing operation was simple. I clicked on "Resize/Move" to open a new window with a slider for moving and resizing the partition. I dragged the slider to cover the whole partition and clicked "Apply" from the main window. After the operation was completed, the partition was ready. Choosing "Partition -> Information" brings up this window:

The result
So did it work? Yes, just as expected.

After shutting the the GParted live CD and rebooting from the hard disk, everything was as expected. Host root file system was 32GiB, fdisk did not complain and no oddities were observed. Here are a couple of examples:

Posted by Heikki Vatiainen at 1:08 AM

I did the same thing just few days ago. I got everything to the point GParted should have applied the changes. It just spit out some nonsense and useless error message (can't remember) and I ended up just mounting another volume in virtual Linux and moving huge stuff there.